[Transcriber Note: This etext was produced from Weird Tales October 1937. Extensive research did not uncover any evidence that the U.S. copyright on this publication was renewed.]

I had come to the Art Museum to see the special show of Goya prints, but that particular gallery was so crowded that I could hardly get in, much less see or savor anything; wherefore I walked out again. I wandered through the other wings with their rows and rows of oils, their Greek and Roman sculptures, their stern ranks of medieval armors, their Oriental porcelains, their Egyptian gods. At length, by chance and not by design, I came to the head of a certain rear stairway. Other habitués of the museum will know the one I mean when I remind them that Arnold Böcklin’s The Isle of the Dead hangs on the wall of the landing. 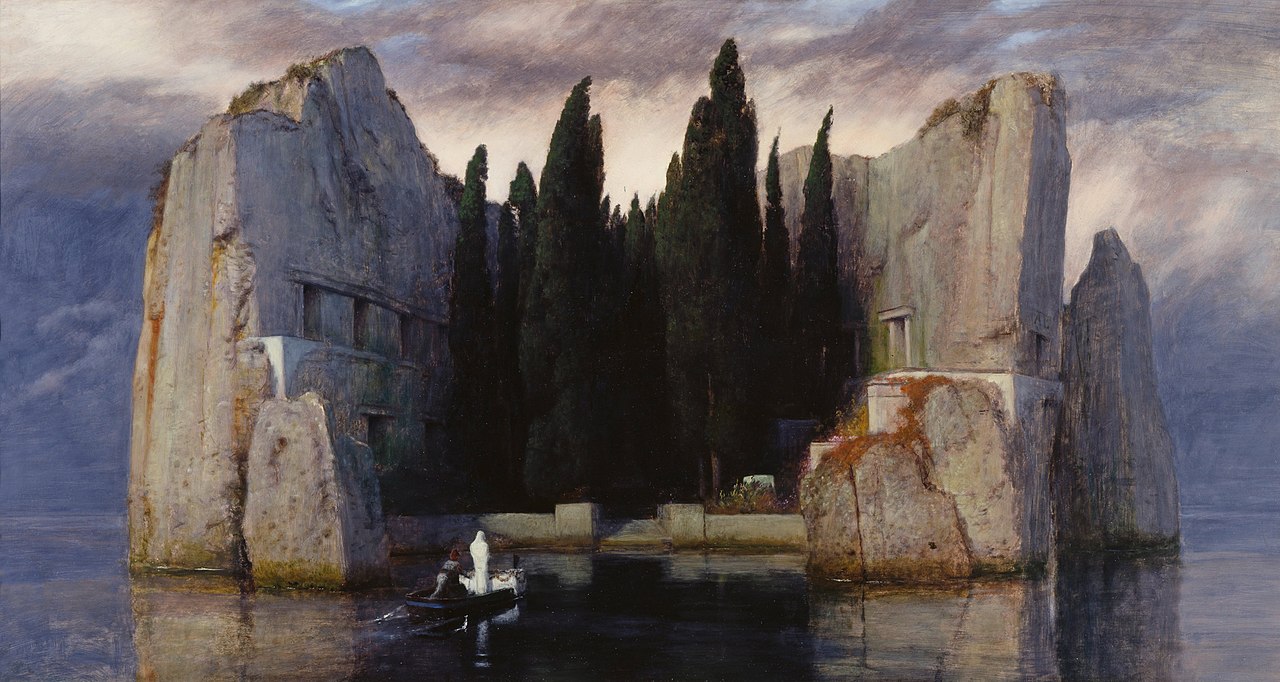 I started down, relishing in advance the impression Böcklin’s picture would make with its high brown rocks and black poplars, its midnight sky and gloomy film of sea, its single white figure erect in the bow of the beach-nosing skiff. But, as I descended, I saw that The Isle of the Dead was not in its accustomed position on the wall. In that space, arresting even in the bad light and from the up-angle of the stairs, hung a gilt-framed painting I had never seen or heard of in all my museum-haunting years.

I gazed at it, one will imagine, all the way down to the landing. Then I had a close, searching look, and a final appraising stare from the lip of the landing above the lower half of the flight. So far as I can learn—and I have been diligent in my research—the thing is unknown even to the best-informed of art experts. Perhaps it is as well that I describe it in detail.

It seemed to represent action upon a small plateau or table rock, drab and bare, with a twilight sky deepening into a starless evening. This setting, restrainedly worked up in blue-grays and blue-blacks, was not the first thing to catch the eye, however. The front of the picture was filled with lively dancing creatures, as pink, plump and naked as cherubs and as patently evil as the meditations of Satan in his rare idle moments.

I counted those dancers. There were twelve of them, ranged in a half-circle, and they were cavorting in evident glee around a central object—a prone cross, which appeared to be made of two stout logs with some of the bark still upon them. To this cross a pair of the pink things—that makes fourteen—kneeling and swinging blocky-looking hammers or mauls, spiked a human figure.

I say human when I speak of that figure, and I withhold the word in describing the dancers and their hammer-wielding fellows. There is a reason. The supine victim on the cross was a beautifully represented male body, as clear and anatomically correct as an illustration in a surgical textbook. The head was writhed around, as if in pain, and I could not see the face or its expression; but in the tortured tenseness of the muscles, in the slaty white sheen of the skin with jagged streaks of vivid gore upon it, agonized nature was plain and doubly plain. I could almost see the painted limbs writhe against the transfixing nails.

By the same token, the dancers and hammerers were so dynamically done as to seem half in motion before my eyes. So much for the sound skill of the painter. Yet, where the crucified prisoner was all clarity, these others were all fog. No lines, no angles, no muscles—their features could not be seen or sensed. I was not even sure if they had hair or not. It was as if each was picked out with a ray of light in that surrounding dusk, light that revealed and yet shimmered indistinctly; light, too, that had absolutely nothing of comfort or honesty in it.

“Hold on, there!” came a sharp challenge from the stairs behind and below me….
comments powered by Disqus